My interest in drawing began in childhood when I first learned to read and write. I was so impressed that marks could mean something. Calligraphy became my hobby.

When I was a teenager in Akron, Ohio, each Wednesday after school I went to our largest department store and took lettering lessons from the man who made all of the stores signs. After two years of lessons, I got a summer job as a signpainter and had an experience that hooked me on drawing. 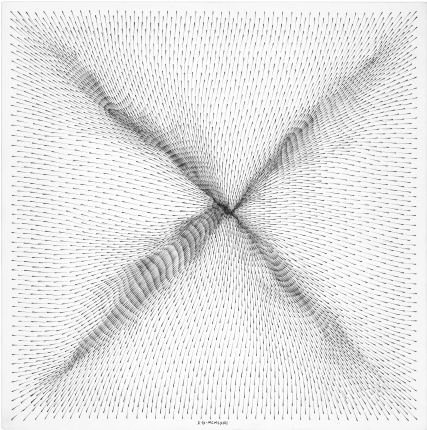 It was 1964. A rock'n'roll show was coming to Akron. Some pop-stars were going to drive around the city performing on the back of a flatbed truck. I had to paint the signs that would decorate the truck. But that weekend, I also wanted to go to a party in another city, which meant I had to get the rock show signs done as quickly as possible.

The signs design included a very thin straight line about 5 meters long under the names of the performers. Painting a line that long freehand (without a straight-edge) is not easy. Ones normal impulse is to do it carefully, exercising tight control. But I learned that day that when you control the brush tightly, you overcorrect and make the line waver. The only way to do it perfectly is by painting faster than you can control.

This was my first taste of the state of grace: attaining mastery by giving up conscious control. Great athletes know about this. So did Jackson Pollock. So do Zen masters and animals that hunt. Maybe its what exhilarates them. It exhilarated me, and one of the main reasons I draw is to revisit that state. Each mark is a tiny leap into grace. And when Im deep into improvization, when the drawing starts to draw itself, I can slip into grace space for days at time.